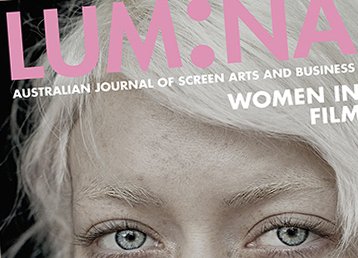 AFTRS LAUNCHES Issue 14 of LUMINA, The Australian Journal of Screen Arts and Business

The reality for women working in Australian film and television, revealed in the WOMEN IN FILM issue of the AFTRS publication, LUMINA, explains why gender equality still matters.

More than 40 prominent Australian women screenwriters, producers, directors, journalists, academics and reviewers have contributed to this compelling collection of essays, articles, analysis and personal reflections, which includes a keynote paper from Monica Davidson, Knocking on a Locked Door: Women in Australian Feature Films.

Below is the introduction to this significant and challending edition, written by Sandra Levy, an eminent television and feature film producer and Tracey Mair, one of Australia’s leading film and television publicists:

Who would have guessed back in the 1970s, in the heady days of feminism, that in 2015 a resurgence of activism was arising from the same issues of gender inequality, and that women were again fighting to have their voices heard and their rights respected. Certainly not me, I thought we had moved on from those early battles and that most of them had been won.

In the screen sector as Monica Davidson says in her keynote essay "men dominate creative leadership in Australian feature films and always have.” This issue of LUMINA looks at both the data and the experiences of women in the screen sector and the numbers tell the story. I’ve always liked numbers, they tell you so many things that anecdotes and personal experiences just don’t. And these numbers are shocking: